The team is an international group of volunteer translators and editors. It is dedicated to making the teachings of Master Shandao, founder of Buddhism’s Pure Land school, better known around the world. For various historical reasons, Master Shandao’s seminal and definitive writings in Chinese are scarcely known outside Chinese- and Japanese-speaking regions.

The team’s origins date to 2011, when it became clear that the paucity of quality materials on these teachings available to the international community was a formidable obstacle to their dissemination and understanding, as well as the sharing of their invaluable benefits. With the blessing of Master Huijing, a core of several volunteers began work that year on the translation into English of key basic texts relating to Master Shandao’s pristine Pure Land lineage. Works published so far are available elsewhere in this website, many of them for download.

The team’s monastic adviser is Dharma Master Jinghe (Ching Ho), based at the Pure Land school in Taiwan and holder of a Master of Business Administration degree from the University of Birmingham. Printed copies of our English publications can be obtained by writing to him at linshihho2000@hotmail.com  or amt@plb.tw. 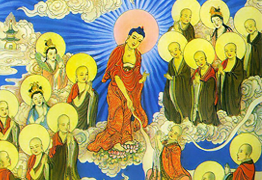