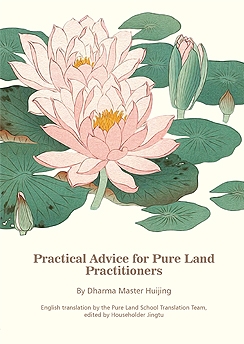 Think about it. Currently there are seven billion people on earth. Less than a seventh may have heard about Buddhism or have a positive impression of it, but even fewer possesses the karmic conditions to accept and learn the Dharma. A true Buddhist must believe in cause and effect as well as rebirth. He must take refuge in the Three Gems: Buddha, Dharma and Sangha. And she must cultivate the path of liberation from samsara.

The path we cultivate is Pure Land. Simply put, the Pure Land path is recitation of Amitabha Buddha’s name.

It is said there are 84,000 Dharma paths in Buddhism. In China, they have been organized into eight branches: Tiantai, Ch’an (Zen), Esoteric, Huayan, Yogacara (Consciousness-Only), Sanlun (Three Treatises), Precepts, and Pure Land. Why should we study Pure Land, and recite the name of only one Buddha -- Amitabha? Because the other traditions require individuals’ own efforts to seek liberation. They must cultivate the precepts, mediation and wisdom, and eradicate the Three Poisons of greed, anger and ignorance. Why eliminate the Poisons? Because they lead us to create karmic causes, entrapping us in the Six Realms of samsara. As long as the Three Poisons have not been eradicated, there is no liberation.

Think about it: Can we achieve liberation through our own efforts? No. This may be hard for Buddhist beginners to appreciate. If they haven’t practiced selfcultivation, they would not know whether it is easy or hard. Only after doing so do they realize it is difficult. That’s why many who have turned to Pure Land are those who practiced for some time.