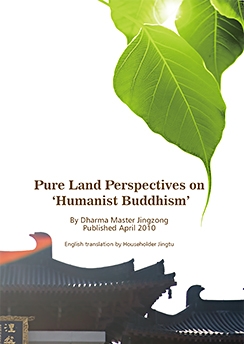 The thinking behind Buddhism of Human Life was like a breath of fresh air, sweeping way shortcomings accumulated over time. It resonated broadly within knowledgeable Buddhist circles. Passed on and developed, it has evolved into the doctrine of “Humanist Buddhism” (renjian fojiao) advocated by Buddhists on both sides of the Taiwan Strait.

The similarities of “Buddhism of Human Life” and “Humanist Buddhism” are greater than the differences between them. The latter term is more in keeping with the times. “Humanist” means of the human world, within the human community, among human beings. Compared with “Human Life,” it not only infers a special quality of being humanity-centric, but highlights the harmony and interconnectedness in human relationships. It thus emphasizes collective interests, common progress and mutual prosperity.

In today’s world, interaction is increasing among individuals, peoples and countries, making them ever more connected but also triggering many disputes and conflicts. That is why the values of Humanist Buddhism are particularly relevant, and in practical ways.

Today, the term Humanist Buddhism is inclusive and accommodative.