Distance No Obstacle to Amitabha’s Deliverance

Zhu Qixuan was a householder from Napeng town in Qinzhou city, Guangxi Province, China. Born in 1930, he passed away at home on January 8, 2010. As Napeng had no Buddhist community and neither Zhu nor his family members were Buddhists, he was buried in his own property in a traditional Taoist ceremony, to release his soul from suffering.

His daughter, Zhu Maoyue, was married to a Taiwanese and lived in Taipei. On learning of her father’s death, she immediately flew back to her hometown for the funeral. She returned to Taiwan about ten days later. She had no knowledge of Buddhism at that time and was at a loss, as she didn’t know how to help her deceased father.

When she spoke with me about the matter, I told her that at that moment, only Amitabha-recitation could help her father be reborn in the Land of Bliss. In fact, that was the ultimate form of filial piety and the only way to truly benefit her father. I also introduced her to the Pure Land school’s Amitabha-recitation center in Taipei, where practitioners recite the name of Amitabha Buddha and help relatives of the deceased. After the daily recitation sessions, the names of the departed are chanted and the resulting merit is dedicated to them.

Ms. Zhu was delighted to learn that. She went to the recitation center and participated in the seven-day Amitabha-recitation sessions held every Sunday morning within 49 days of his father’s death. On regular days, she also followed instructions from the Dhama masters there and dedicated the merit from recitation to her father.

Zhu’s widow was very concerned about where her husband went. In early February, she sought help in Napeng from a woman with psychic abilities, who immediately used her powers to find the answer. She said, “Mr. Zhu has been invited to a relative’s place in a far-away place.”

“His daughter!” replied the psychic. “There, he was taken to an especially bright and splendid place by a brilliant golden Buddha with big ears.

Zhu’s widow was delighted to hear that. Though she had no knowledge of Buddhism and had idea of Amitabha Buddha or the Land of Bliss, she knew that her husband had gone to a very special place.

She called her daughter in Taipei to tell her the result of the divination. Her daughter told her that as soon as she had returned to Taiwan she started to attend the seven-day recitation service and recited Amitabha’s name on behalf of her father. Both mother and daughter acclaimed the unfathomable merit of Amitabha-recitation.

When he was alive, Zhu Qixuan had neither heard of the Dharma nor recited Amitabha’s name even once. Yet he was still received by Amitabha Buddha in the Pure Land simply through the recitation dedicated to him by his far-away daughter, as well as monastics and fellow practitioners. This shows that Amitabha-recitation is simple and straight-forward, free of complicated rituals or ceremonies. It also provides the supreme benefit of being instantly received by Amitabha Buddha. Nothing matches Amitabha-recitation in terms of its ability to transcend time and space, and to benefit both the dead and the living, oneself and others.

Zhu Maoyue’s husband, Liang Guisheng, was another who never learned the Dharma or recited the name of Amitabha Buddha. He passed away on February 27, 2010. Ms. Zhu invited monastics and fellow practitioners from the recitation center to recite Amitabha’s name for 24 hours on his behalf. An Amitabha-recitation funeral ceremony, including body cleansing, encoffination and cremation, was conducted on a voluntary basis by members of the center.

On October 21, 2013, recalling her father’s deliverance to the Pure Land, Zhu Maoyue wondered if her husband had also been reborn there. She called her mother and asked her to consult the psychic woman. The answer the psychic gave was exactly the same as that about her father. She said, “Mr. Liang has been taken to a wonderful place to live by a great, glittering golden Buddha.” This assured Ms. Zhu and gave her much peace of mind.

The events above were recounted by Zhu Maoyue, who asked me to record them. Our effort is an expression of our gratitude for the Three Gems. It is also our hope that all beings will recite the name of Amitabha Buddha and be delivered to the Land of Bliss when their lives end. May all our friends and families be reunited forever, with infinite light and life similar to that of Amitabha Buddha. 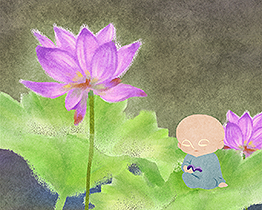