About 30 kilometers from Hongyuan Monastery is a village called Lianzhou. There lives a woman who has been slaughtering pigs for decades; fellow villagers call her “the Butcher.” She did not believe in Buddhas, Bodhisattva, deities and demons or the workings of karma. In fact, she opposed them all.

My younger sister married into the community and became a relative of the Butcher. The latter often sneered at my sister for reciting the name of Amitabha Buddha and being a vegetarian.

“Why on earth should a young woman like you want to be a vegetarian?” she would say. “And what is this recitation and karmic-debt business? If there really were ghosts or spirits demanding what’s due to them from those who have hurt them, they would have come for me long ago. I’ve been slaughtering pigs for decades, yet can’t you see I’m doing just fine?”

It’s no surprise she should have said that. She was so stout and strong that even men were afraid of her. When building her own house, she managed to carry under each arm a sack of cement weighing 50 kilograms  and go straight up to the roof. She could also lift a 100-kg. pig by its hind legs easily. Such abilities helped make the Butcher an unreasonable person. She bullied others during disputes. By simply glaring at her antagonist and bringing down her chopper hard on the table, she could silence anyone.

In February 2004, my sister brought the Butcher to see me: she wanted to take refuge in the Three Gems. I was taken aback by her haggard appearance. The Butcher seemed to have shrunk physically and her face was sickly black to a shocking extent. Gone was her self-confident assertiveness; she seemed a totally different person. At that instant, I thought to myself that she would not survive more than a month.

In fact, the Butcher was suffering from a strange illness – her whole body was like a bloated pig. She had to spend several hundred yuan every week at the hospital to draw out the excess fluid, after which she would look normal again. But as soon as she drank water, the puffiness would return. Even when unbearably thirsty she dared not drink or even eat fruit. All she did was moisten her lips with a wet towel. Her misery was indescribable. When doctors couldn’t heal her she turned to mediums, though they failed as well. She spent all the money she earned from slaughtering pigs on trying to cure the condition. Finally, she had no choice but to turn to the Buddhas and Bodhisattvas and to seek refuge.

I tried to comfort the pitiful woman. “It’s good that you want to take refuge,” I said. “Come and make three prostrations to the Buddha first.” She responded, “I can hardly stand without someone holding me. Is it all right if I don’t bow?”

I asked my sister to help her make a brief greeting to the Buddha and let her sit down. After the refuge-taking rituals, I explained to her that Amitabha Buddha had made a compassionate vow at his own initiative to deliver all sentient beings on an equal basis. All we need do is to have faith in and accept his deliverance, and recite his name single-mindedly. Amitabha-recitation helps us in this life to overcome adversity and avoid calamities, stay free from infirmity and achieve longevity. When our lives end, we will be received by Amitabha and assuredly be reborn in his Pure Land. Not only will we avoid the torments of sickness and reincarnation within the Six Realms, we will also have infinite lifespans and feel perfectly at ease in body and mind.

However, I could tell that the Butcher only wanted her illness to be cured. She wasn’t too concerned about rebirth in the Pure Land. Before she left, I gave her a pendant inscribed on both sides with the six Chinese characters, “Namo Amitabha Buddha,” together with a necklace to wear. In addition, I let her have a loop with 108 prayer beads and told her, “Yours is a karmic sickness. No doctor or deity can heal it. Go home and earnestly recite the name of Amitabha!”

A month later, my sister came and told me about a peculiar incident involving the Butcher. Three days after the Qing Ming festival (tomb-sweeping day), while sitting at home during the day, the Butcher saw three ghosts enter through the door. The first spirit was in his mid-50s and wore a black top. The other two were younger, one holding a chain and the other a bowl of liquid medicine.

The eldest ghost instructed the other two, “Put the chain round her and force the medicine down her throat.” However, despite several attempts, the spirit with the chain could not bind the Butcher. The senior ghost scolded the younger one, “What the heck are you doing? Can’t you even chain her?” Responded the younger ghost, with some rancor: “I tried, but every time I approached her with the chain, her chest emitted a light [she was wearing the Amitabha pendant] that repelled my chain.” Said the senior spirit: “In that case, chain her ankles.”

Afterwards, my sister asked the Butcher, “Why didn’t you recite the name of Amitabha at the time? The pendant you wore was glowing. Had you recited Namo Amitabha Buddha, wouldn’t the beam have been more intense?”

“I didn’t think of that,” said the Butcher. “I was spitting blood [she had a spittoon by her side as she often spat blood] and at the same time had to fend them off.” She happened to have the 108-beaded loop with her during the assault by ghosts and she used it as a weapon to ward off their chain. Remarkably, the beads also emitted light because, I think, she had used it for her recitation. The chain recoiled when it came into contact with the beads. The three ghosts then disappeared.

That was an amazing incident. To verify the details, we sent Master Jing’an with his video recorder to visit the Butcher. Jing’an was told the same story, with identical details. The Butcher rolled up her pants and showed him her swollen legs. They had marks from the chain with which the ghost was beating her.

Not long after the episode of “the glowing amulet exorcising ghosts,” I heard from my sister later, the Butcher was very diligent in reciting the Amitabha’s name. Her health improved rapidly. However, when the whole thing was behind her she gradually forgot about it. Without Dharma friends to guide her, she started to slacken. Occasionally she bumped into my sister, who would remind her to recite. She would step up her efforts as a result. It was in such a sporadic manner that she practiced her Amitabha-recitation. Though she has clung on to life, she is suffering from various serious ailments, struggling between life and death.

It was as though heaven and earth, deities and demons, had picked the Butcher’s case as a living example to illustrate the inexorable law of cause and effect. Indeed, it contains a message to us all: To free ourselves from the cycle of rebirth, we must recite the name of Amitabha Buddha exclusively and seek rebirth in his Pure Land. 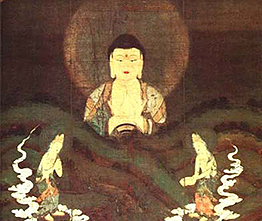