Amitabha-Recitation at the Point of Death: Delivering a Dozen Vengeful Souls

Master Puji is Taiwanese. Before becoming a nun, she liked to abuse people verbally and formed negative karmic links with many. Later she took her vows at Lingyin Monastery by Lake Qingcao in Hsinchu, northwest Taiwan. One day, she suddenly turned blind.

In her seventies she fell ill, with her whole body becoming swollen. She went to the Vajra Cave where Chan Master Wushang was undergoing a retreat and cried out, “Master, I’m about to die. Please teach me how to free myself from the sea of suffering.”

Master Wushang returned to the monastery and saw that her room was dirty and smelly, with excrement scattered about. Day and night, Master Puji would wail and say she was being beaten by a dozen or so people. She even called out the name of the vengeful spirits.

When the wife of her younger brother came to visit, Master Wushang asked her, “Do you recognize the names your sister-in-law has been calling out?” “I do,” the visitor replied. “They were all people whose deaths she caused when she was young.” No wonder those bitter spirits were beating her, causing her body to bleed and swell!

Master Wuchang prepared for her a room which had been empty. In the middle of the bed he bore a cavity and placed a bucket underneath. It would accommodate her excretions.

But Master Puji wailed and cried out the names as before; she even put her head into the bucket meant for her excrement. With skillful means, Master Wuchang instructed her, “To free yourself from suffering, you must recite the name of Amitabha Buddha and seek rebirth in his Western Pure Land.” Master Puji replied, “Everything is dark before me. I do not know how to recite.”

Master Wuchang said, “Just recite along with me.”

After about an hour’s recitation, Master Puji suddenly smiled and said, “I see a great brightness in front of me. The dozen vengeful spirits are standing there, and they are smiling!”

Those souls thereupon attached themselves to her person and said, through her mouth: “Master, thank you for your compassion. A blind, thoroughly evil person has actually been able to deliver us dozen from suffering.”

Replied Master Wuchang, “One must always dispel vindictiveness, never create it. You too should recite Amitabha’s name and gain rebirth in his Pure Land even while carrying your karmic offenses. Only then will you be free of the great suffering arising from the cycle of rebirth.” He then asked Master Puji to continue reciting Amitabha’s name with him.

After another hour of recitation, Master Puji said, “The sky is now full of light. A sacred assembly, dressed in white, stands in the clouds, ready to receive us into the Western Land of Bliss.” Pressing palms together and looking up, she smiled and passed away peacefully. The swelling and blood that covered her body vanished all at once. She became clean, odorless.

Amid the suffering at the point of death, vengeful spirits approach;
What can save us? Only our karmic ties to Amitabha Buddha.
If we recite his name, Amitabha will protect us with his light.
With minds and bodies at ease, we, and others, will be saved together.
If we fail to recite, we would certainly fall into the hell domains,
To be reborn endlessly within the Three Wretched Realms.
The merit from Amitabha-recitation is immeasurable –
Thanks to the power of Amitabha’s great and compassionate vow. 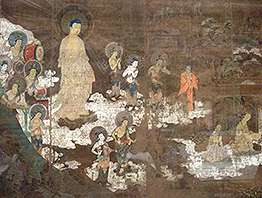