Protected by an Amitabha Card During a Highway Calamity

Householder Luo Fo’en, 27, is a native of Chengdu, China. In September 2001, he left home to work in faraway Johannesburg, South Africa. Before his departure, his mother, a Buddhist, gave him a pocket card with an image of Amitabha Buddha. She repeatedly told him to carry the card with him whenever he went out. When he got home at night, she admonished, he should respectfully place it on a table. That way, whenever she did her daily recitations of Amitabha’s name, she would be able to connect with her son wherever he was and he would be under Amitabha’s protection.

So Luo Fo’en, a non-Buddhist, put the Amitabha card in his wallet for the love of his mother. Upon returning home, he opened the wallet and placed it on a wooden box above his bed. He also put his family photos in the wallet, together with the card. Whenever he opened his wallet, he would look at his mother’s photo and say, “I will do my best and won’t disappoint you …” He always followed her instruction and respectfully recited “Namo Amitabha” three times.

On December 25 that year, during the Christmas holidays, everyone was excited about visiting places. Luo Fo’en decided to go along with friends because he didn’t want, when he got home in the future, to tell others he had not been anywhere in Africa during his sojourn there. Fifteen of them packed into an eight-seater passenger van and flew down the highway at high speed. South Africa’s wide flat highways were ranked No. 3 in the world.

The van soon came upon a big downhill slope. As passengers in the front excitedly shouted out the speed – “170, 180, 200, 205” – disaster struck. The vehicle lost control and, like a metal barrel, rolled forward for 200 to 300 meters. All the passengers were killed – except Luo Fo’en, who miraculously escaped unharmed.

“It all happened so quickly,” he later recalled. “When I was young, I used to tie a stone to a cotton string and swing it above my head in circles. With each circle the speed got faster. Suddenly, the string broke and the stone flew out and disappeared, leaving my mind blank. That was what the accident was like. I only remembered yelling ‘Mom!’ when I realized the danger. At that moment, a golden ray of light appeared and I was completed surrounded by it. I felt weightless, with no fear at all.”

Given the severity of the accident, there shouldn’t have been any survivors. How did Luo Fo’en survive and escape without serious injury? People started talking about this and almost all thought that the Amitabha card he carried had protected him from this fatal calamity. They believed that his filial piety towards his mother and his respect for Amitabha Buddha also played a part. Suddenly, many Chinese living in South Africa began looking for Amitabha wallet cards, hoping that by carrying them they too would be protected.

Luo Fo’en is now a devout Buddhist. He does volunteer work in Chinese Buddhist temples in South Africa whenever he has time. He helps in the kitchen, or with the cleaning and tidying. Whenever he sees other Chinese pass by, he gives them an Amitabha wallet card and tells them about the story of how he escaped death because of Amitabha Buddha’s protection. 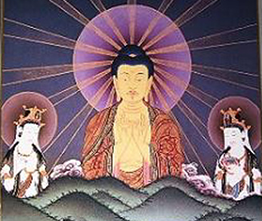