My name is Peng Chucai. I'm 68 years old. When I was young I did not work seriously and regularly hunted wild ducks.

I live in the central area of Lake Dongting. Decades ago, a large number of wild ducks would gather there every day to forage for food.

At dusk, I would drive a boat to search for wild ducks. I carried a long-barreled gun fully loaded with small metal pellets. After taking aim, I lit the fuse and shot. The metal pellets fanned out in all directions, killing ducks that could not dodge them quickly enough. I returned with a big haul every time.

Once, however, the gun went off accidentally: Instead of hitting the ducks, I hit myself in the left arm. The pellets went through my clavicle, and the pain made me scream. Fortunately, it was not a fatal injury. Since then I have not dared hunt wild ducks.

In October 2002, my past karmic offenses caught up with me and the left half of my body suddenly became paralyzed. I remembered a book that a Buddhist monk gave me when I made a pilgrimage to Mt. Nanyue ten years ago. (I had never opened it.) Curious, I opened the book and found a paragraph describing the benefits of Amitabha-recitation. I began to recite the name of Amitabha Buddha, according to the instructions given. Recalling the wild ducks I had killed, I felt terribly guilty!

After several days of recitation, I began to feel better. The paralyzed left half of my body gradually resumed its functions. I was very happy and vowed to recite Amitabha's name for the long term.

Every time Master Zongdao came home to visit his family, I would go and ask him to explain the significance of Amitabha-recitation. Since taking refuge in the Three Gems in July 2003, I have had an inexplicable experience. My right ear, deaf for more than a year, suddenly began to hear the faint whisperings of a voice. At 5 o’clock every morning, it would urge me, “Recite, recite, Amitabha, Amitabha ...” The voice did not stop until I finished my morning recitations at 7 o'clock.

Before the dusk, the voice would come again, urging me to recite. It was like that every day – truly unfathomable.

I think if it weren’t for the positive karmic circumstances I have encountered, I would never have been able to settle accounts with the karmic creditors from my previous and present lives.

Now, having listened to the Dharma masters, I understand Buddhism’s basic principles and believe that I am an iniquitous ordinary being, subject to the cycles of birth and death. Only by having faith in the power of Amitabha's vows, relying on his deliverance and reciting his name single-mindedly, can we reborn in the Land of Bliss and leave suffering behind for happiness. 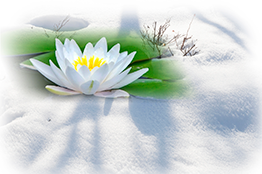