First, please allow me to explain why I suddenly noticed Amitabha Buddha.

At the end of 1986, Householder Yan from the Houston branch of Fo Guang Shan Monastery gave me a tape called “Five Methods of Amitabha-Recitation.” Recorded in Taiwan, it featured recitations of “Amitabha Buddha” and “Namo Amitabha Buddha” with different tunes and rhythms. It’s believed that such modes of recitation originated in China’s Tang Dynasty.

I remember that during my first vacation, I was vexed about something. Actually, I was worrying less than before, having attended several ten-day training sessions in insight meditation. So my problem was quite special, relating to negative karma from previous lives. Strange thing was, once I started reciting Amitabha’s name, my anxiety vanished without a trace. This naturally caught my attention. I really liked the five methods of Amitabha-recitation; the sounds filled me with joy.

At the beginning of 1987, I had an inspiration and began teaching a course at the Jung Educational Center, focused on the Buddha’s blueprint for liberation – the Noble Eightfold Path – as well as some basic Buddhist concepts. While making preparations, I consulted a variety of books in Chinese and English, and learned that Amitabha was a transliteration from Sanskrit, meaning “infinite light.” Amitabha, an enlightened being, dwells in the Western Land of Bliss, some 10 trillion Buddha realms away from us. The goal of Pure Land Buddhism is to recite the name of Amitabha Buddha and be reborn in the Land of Bliss.

Throughout the millennia of Chinese history, there have been many examples of Amitabha responding to people’s recitation – thus the saying, “Amitabha is in every family.” At the Jung Center I introduced the name of Namo Amitabha Buddha to students and explained its pronunciation in ancient Sanskrit. “Infinite light” may not produce much of an effect in other languages, but if Amitabha Buddha is recited in Sanskrit, the consequences are special indeed. They include the elimination of karmic obstructions and deliverance of the deceased, so they are reborn in the Land of Bliss.

Peter was one of my students, as well as a colleague and good friend. Born in Britain, he earned a Ph.D. in electrical engineering from his country’s most famous university. He worked over the past decade with Albert Szent-Gyorgyi, recipient of the Nobel chemistry prize for the discovery of vitamin C.

Peter and I were colleagues for three years. He came to the cancer center at the University of Texas last year. Possessing deep roots of wisdom, he had some personal experiences relating to previous lives. One reason we enjoyed working together was that we had similar perspectives on life.

About three weeks into the course, Peter told me that for years he had been troubled by ghosts in dreams every day before sunrise. Since he joined my class, things had become worse and the spirits appeared more often. I told him that ghosts wouldn’t approach unless they had some karmic connection with him. There were two common causes. One was that his relatives or friends in previous lives were suffering in the hell domains and asking for help; the other was that his enemies in previous lives had found him. The situation intensified because they knew he was learning the Dharma and Amitabha-recitation, and now had the ability to release them from hell. Next time the spirits came, I advised him, just recite Amitabha’s name on their behalf.

The next day Peter told me that the ghosts had appeared again before sunrise. He began reciting Amitabha’s name while half dreaming. The spirits immediately stopped their pestering. When he had recited a while, two twisted faces appeared in front of him and said, “Please don’t stop, because we cannot make those sounds.” The apparitions haven’t troubled him again since. Occasionally, he felt that spirits were asking him to recite Namo Amitabha Buddha. These days he regularly plays the tape of the five methods of recitation while driving to and from work.

Edward, in his fifties, is a worker in the oil industry. He loves yoga and Waidangong (a kind of qigong, or breathing exercise), which he began learning last summer. This year, after we founded the Waidangong study center, he came punctually every week to practice. Following a session in April, we had a chat. He mentioned that the former owner of his house, who had passed away long ago, returned to her bedroom and slept there once every six weeks or so. Edward had grown accustomed to the situation.

But we, his listeners, all indicated this was not normal, as most spirits moved on to their next lives instead of remaining in place. Most people don’t know what happens after death and think it is the end of everything, so they get confused when they find that their spirits live on. I suggested that Edward recite Amitabha Buddha’s name the next time he saw her.

Two months later, Edward told us about the effects of reciting the sacred name. The day after our last conversation, the deceased owner turned up again. Edward was a bit nervous, concerned he might upset her if he did not pronounce the name correctly. He recited “Amita” once, and nothing happened. Then he recited, “Amitabha Buddha … go in peace” – and she departed. The spirit left Edward three messages, one of them recommending that he spend his time more wisely, especially on good deeds such as community service and charity. She hasn’t appeared again.

At the end of last year, Betty’s father was diagnosed with lung cancer. His condition was unstable. Cancer cells were found in his trachea this May; they had to be removed by a second round of surgery. Betty returned to Washington, D.C. from Houston to be together with her mother.

I happened to be in Washington for three days, teaching Waidangong. One June 14, Betty invited me to stay at her house for the night. Her father was a senior manager in a big pharmaceutical company. Their house was beautiful, with two-and-a-half floors and half an acre of backyard. It might inspire envy from outside, but Betty’s mother never dared stay at home alone. So Betty came home while her father was in hospital.

That evening, I walked into her house and immediately sensed a negative atmosphere. I felt pressure in my chest while walking upstairs and it was not comfortable. After we sat quietly for an hour, I told Betty what happened. She said she had the same feeling in her chest at night, as she returned home last September when her father fell sick. She could barely breathe, and felt as though something was trying to push her out of the bedroom. At the time she thought it was a kind of telepathic communication with her father, indicating to her that he was sick in the chest.

I sensed that the house was haunted by spirits and I wouldn’t go to sleep without reciting Amitabha Buddha’s name. Betty and I did so for about an hour, following the “Five Methods of Amitabha-Recitation” tape. During the first half-hour I felt a chill, but in the second it was gone. We both felt the atmosphere had become more benign and I slept peacefully.

Later, Betty told me that she once consulted a lady from Florida who has special powers. She asked whether her father’s disease was related to ghosts and whether there were spirits in her house. The lady replied that two ghosts had lived in the house before, and that they had an influence on her father’s illness. After she performed Amitabha-recitation regularly, the malevolent atmosphere was gone and her father’s condition has improved significantly. He remains in hospital, but is much more at peace.

Betty later learned from her neighbor about some strange goings-on in the house next door, which is more than a hundred years old. Furniture would move on their own, and a woman in black would appear at night, seen more than once by neighbors. It turns out that the territory across the pond in front of the house had belonged to native Americans. This would have gone unnoticed, if it weren’t for her father’s illness. The neighbor also told Betty that the woman in black hadn’t shown up since Betty visited. During her visit, Betty silently recited Amitabha’s name most of the time.
In life we come across many things that we don’t understand, especially what happens after people die. These three cases indicate that spirits exist after death. They also show that Amitabha responds to the recitation of his name, even in a predominantly Christian country like the United States. Amitabha-recitation is something that transcends religion.

Indeed, Amitabha Buddha’s compassion and power are beyond the imagination of us ordinary people. The case of Betty’s father reminds me that many illnesses are related to karma and vengeful spirits. In such instances, it is very hard to cure the disease without eliminating the relevant karmic obstructions and delivering the spirits. Amitabha-recitation, which can do both, is a rare and precious treasure. People fortunate enough to learn it should cherish the opportunity and recite the name of Amitabha Buddha as often as they can.

The author of this article was born in Tainan, Taiwan, in 1951 and emigrated to the U.S. with her parents as a child. She earned a Ph.D. in chemistry at the Massachusetts Institute of Technology after graduating from the University of Hawaii. She was the founder of Lapis Lazuli Light in Malaysia. She works in research relating to cancer prevention and treatment, and contributes to research on environmental hazards such as electromagnetic waves and the pollution of water and soil.

Remarks: The U.S.A is the country with the highest percentage of inhabitants who have religious beliefs. Ninety percent of Americans are born Protestants or Catholics. They are unfamiliar with Buddhism, even more so with the name Namo Amitabha Buddha. When they recite it under certain circumstances, they do so rather mechanically and without understanding the underlying meaning. Even so, Amitabha-recitation has unfathomable effects, because the name of Amitabha Buddha is Amitabha Buddha per se. Whenever we recite, Amitabha is present. The name and the entity are one. Sentient beings who recite and recall Amitabha Buddha will receive his protection and support; in future, they will be reborn in the Western Pure Land. The various effects of recitation in the above accounts make this clear. The teaching and practice of Amitabha-recitation truly transcends nation, race and religion. It is applicable everywhere. 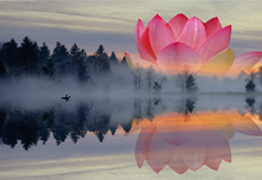