In 2nd century B.C.E., Buddhism was thriving again, thanks to the efforts of King Kaniska in northern India. Represented by Asvaghosa, Mahayana (Greater Vehicle) groups began to form in various locations.

Q22 : Were all the previous schools Theravadan (Smaller Vehicle)?
A: Yes. The purpose of a "vehicle" is to carry [people or goods]. Generally speaking, the Greater Vehicle stresses benefiting all beings and attaining liberation together with them. The Smaller Vehicle emphasizes salvation for oneself.

Q23 : What happened afterwards?
A: In the 3rd century C.E., Nagarjuna, a Brahmanic scholar in southern India, converted to Buddhism and became a monk. He learned the Mahayana sutras from an old bhikku in the Himalaya mountains. Thenceforth he acquired great wisdom. He wrote many theoretical treatises to explicate the Mahayana scriptures. His Madhyamaka ("Middle Way") thought spread throughout India. Mahayana Buddhism started to flourish. With his voluminous writings, Nagarjuna was known as the "common patriarch of the Eight Schools" of Chinese Mahayana Buddhism.

In the 4th-5th centuries C.E., the Gupta Dynasty (320-550) reunified India. Two brothers, Asanga and Vasubandhu, founded a new Mahayana school — Yogacara. Vasubandhu was known as "treatise master of a thousand volumes" because of his prodigious output.

In 6th century, the Gupta Dynasty was overthrown by foreign races and Buddhism suffered severely. Later King Siladitya of the Vardhana Dynasty (606-647) unified central India and Buddhism enjoyed a slight revival. The Nalanda Monastery, whose construction began during the Gupta period, continued to expand and and attained an impressive scale during the Vardhana Dynasty. Mahayana scholars assembled there for lectures and studies, and it was considered India's leading educational institution of the time. The period between the mid-6th and mid-7th centuries marked the golden age of Nalanda. When Master Xuanzang of China went there to study, its instructors included treatise Masters Silabhadra of the Yogacara school and Jnanaprabha of the Madhyamaka school.

After the death of King Siladitya, central India again fell into disarray. Most of the kingdoms in India followed Brahmanism, and Buddhism gradually declined. However, the Pala Dynasty in eastern India, which lasted from the mid-7th century till the end of the 11th century, adhered to Buddhism. It ruled over the territory east of Magadha, which included Nalanda's location. It built an even larger temple, Vikramasila, near Nalanda.

Late in the 7th century, Brahmanism absorbed some Buddhist teachings, greatly expanding its own doctrines. It flourished with a new posture. Thenceforth, Western scholars would refer to Brahmanism as Hinduism. Buddhism faced a shortage of talent. Its response to such karmic conditions saw the rise of esoteric Buddhism. It expediently adopted many Brahmanic rituals and applied various interpretations to them. Nevertheless, its doctrines continued to be based upon the concepts of emptiness and non-self. After the 9th century, esoteric Buddhism became more popular.

In the 11th century, extensive Turkic invasions ravaged all of India's domestic religions. The Buddhist masters dispersed and fled; many went to Tibet, by way of Nepal. Influential educational institutions such as Vikramasila Monastery were ruined, with few monks remaining. By the 12th century, Buddhism had vanished from India.

Today's Indian Buddhism was reintroduced through Sri Lanka late in the 19th century. In recent decades, Buddhists from China, Japan and Myanmar have built monasteries in various sacred Buddhist sites in India.

In October 1956, Dr. B.R. Ambedkar, leader of India's untouchables, announced his conversion to Buddhism and stated Buddhist teachings such as "human beings are not created by God" and "all sentient beings are equal." Half a million untouchables taking part in the assembly heeded his message. They gave up their Hindu faith and converted to Buddhism. The movement unleashed powerful waves nationwide, with tens of millions becoming Buddhists. 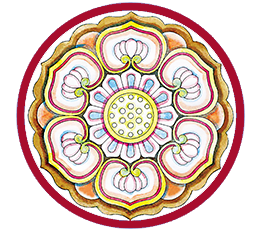