Exhorting the Karmically-Connected to Hear the Buddha’s Compassionate Deliverance

I would like to spend a bit of time discussing the meaning of the verb “to exhort”. There is something rather moving about the act of exhorting. Whether it is our lineage patriarchs, virtuous advisers, Bodhisattvas, or Buddhas, they all invariably use “exhort” when they want to impress upon us the importance of certain things. On hearing this word, we feel that they are offering us some earnest advice, in much the same way as an elderly parent or a revered senior member of the family does: kindly, warmly and patiently. They say, “I earnestly exhort you to …” This is neither intimidating nor menacing. Religious faiths based on theism often employ a rather threatening tone in their propagation, such as: I created you, you must obey me. All those who do not obey God are condemned to Hell for eternal torment. Perhaps due to different aptitudes, we find it hard to believe in such a deity.

There are a number of  connotations to the word “exhort”.

First, it indicates not a command but an advice between equals. The one who exhorts and the one being exhorted are entirely equal, whether in personality or Buddha-nature.

Second. Since you are only being encouraged and urged to do something, you have the right to do it or not. There is no element of threatening or forcing it on you  “I am here to advise you that it is better for you to do it this way -  that it will benefit you, and relieve your sufferings in the six-realm samsara. It is up to you, depending on whether your virtuous roots of capability are ripened,  whether to accept the advice or not, and to what extent you can believe it.” It’s entirely a free will consideration.

Third, the word “exhort” expresses a certain respect. While Buddhas and Bodhisattvas are in a league by themselves in terms of wisdom and compassion, yet they look upon us as their equals with respect. They do not belittle or reject us.

Fifth. It is out of compassion that the Buddhas and Bodhisattvas proactively exhort us to accept the benefits of attaining Buddhahood so that we can escape from the suffering in the cycle of birth and death and enjoy eternal happiness in the Land of Ultimate Bliss. They do not do it out of any self-interest. Therefore, they use the word “to exhort.”

Sixth,  “to exhort” ensures a positive effect. Since all sentient beings possess Buddha-nature, when Shayamuni Buddha urges us to undertake a certain Dharma path with compassion and wisdom through various skillful means, our Buddha-nature can resonate with his appeal. There is something called ‘yuan’ (a karmic connection with something or someone) at work. When the yuan is at the right time and at the right place, our Buddha-nature will resonate with the teachings of the Buddha, and we will be persuaded to aspire to rebirth in the Pure Land of Amitabha Buddha. The effect may not show itself right now, but it will eventually. As a Buddhist saying goes: any effort to accrue merits and virtues will never be wasted.

Seventh,  since all sentient beings have Buddha-nature, all Buddhas and Bodhisattvas are appealing to the inner core of our Buddha-nature when they exhort and move us, so as to make us identify with them. The exhortation will definitely work.

Therefore, “to exhort” gives us great comfort and touches us deeply. Sentient beings are so pitiful, what with their ignorance and arrogance. They would rather be deceived than be exhorted. 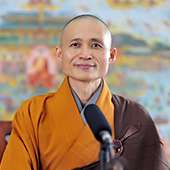